Design a site like this with WordPress.com
Get started
Skip to content
January 18, 2019March 4, 2019 Mark J Whitehead

I am currently working on a project that is exploring changing practices and perceptions of freedom. The hypothesis of the research is that smart tech, the insights of the behavioural sciences, the emergence of big data and algorithmic government, and the rise of Behavioural Public Policy are coming together to redefine the norms of freedom within liberal societies. The project speculates that despite the potential significance of these developments changing practices and perceptions of freedom are emerging in fairly tacit and unacknowledged ways. In the early stages of reading, I have been reminded  of how discussions of freedom are inextricably connected to notions of harm. If freedom is a normatively desired state within liberal society, its diminution tends to only be warranted when its loss prevents other forms of harm. Reading around themes of freedom, harm and governance opens-up a bewildering array of perspectives, which demarcate radically different perspectives on human nature, the role of government in society, and the nature of social interactions.

The political theorist John Dunn offers a helpful diagrammatic way of expressing the concerns that different political traditions have regarding the relationships between harm and freedom[1]. According to Dunn, when you compare anarchist (you could add libertarians to this group on certain grounds) and liberal democratic thinking it is possible to discern divergent anxieties with regard to the vertical and horizontal determinants of harm and freedom. Anarchists are primarily concerned with the harm that can be waged by states, governments, and related hierarchical systems of social organisation (vertical power), but assume that it is possible to establish fairly harmonious relations among people (in the horizontal sphere of interpersonal social relations). Key thinkers within the liberal democratic tradition (such as Rousseau, and we could include Hobbes here, though not as a liberal democratic thinker) are more concerned with the harm that can be done to individuals by others in (the horizontal realm of) civil society. The liberal democratic tradition thus sees hierarchical forms of (vertical) power as potentially benevolent forces whose operation can protect us from each other and enable us to secure freedom. 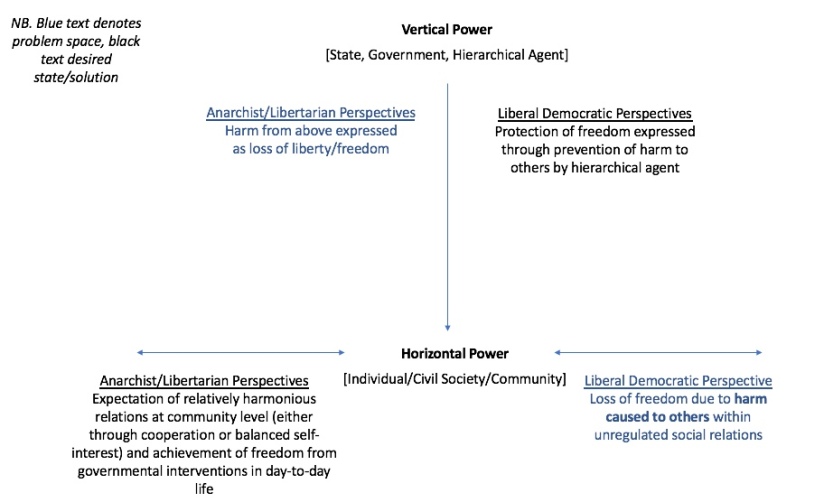 Dunn’s depiction of different political perceptions of power and harm led me to ponder where contemporary forms of Behavioural Public Policy fit in to his diagram. For those who are unfamiliar with Behavioural Public Public policy, it is an approach to policy-making that uses emerging psychological insights regarding human behaviour (particularly concerning bounded rationality and willpower) to inform the processes of government. Crucially, it seeks to shape/nudge human conduct in subtle ways, without undermining personal liberty and freedom. There are four things of particular note when thinking about Behavioural Public Policy in relation vertical and horizontal concerns of power and freedom: 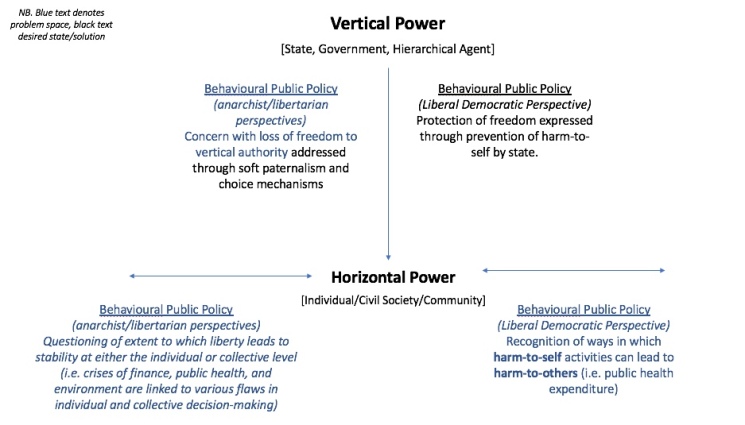 Thinking about Behavioural Public Policy through Dunn’s framework suggests that related policies reflect a potentially significant affirmation, and extension, of liberal democratic norms concerning the regulation of harm and the constitution of freedom. At the same time, Behavioural Public Policy also reflects a partial rejection of certain anarchist and libertarian assumptions concerning the nature of liberty and sources of social and political harm.

Of course, thinking about emerging forms of behavioural government through Dunn’s framework does not exhaust the ways it is possible to theorise harm and freedom. What is does suggest is that changes are emerging concerning how we may think about freedom, harm and the relationship between states and civil society. While still relatively nascent in form, these are developments that may be more significant to the future of liberal democratic societies than either advocates or opponents of Behavioural Public Policy currently acknowledge.